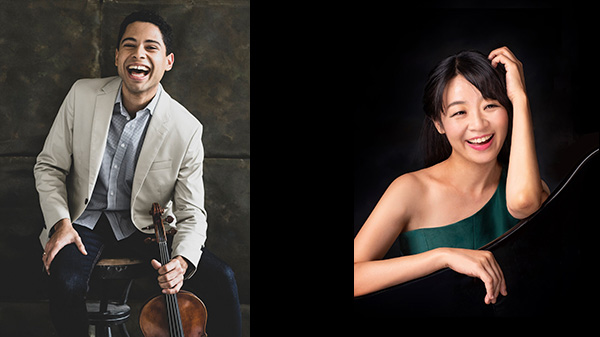 He is frequently in demand as a concerto soloist, recitalist, chamber musician and educator. The 2021 YCAT Robey Artist and a top laureate of the 2020 Sphinx Competition, Bak is also a Grand Prize winner and Audience Prize recipient of the 2019 Concert Artists Guild Victor Elmaleh Competition, the recipient of the 2019 Samuel Sanders Tel Aviv Museum Prize and the 2019 John White Special Prize from the Tertis International Viola Competition. In addition, Jordan Bak is a member of the celebrated New York Classical Players and is a featured artist for WQXR’s Artist Propulsion Lab.

Pianist Jihye Chang enjoys a diverse career as a soloist, collaborator, educator, scholar, and advocate for new music in the United States and abroad. Her performances focus on the creative process of collaborating with living composers, curating programs that can connect to various audiences, and giving context to contemporary works. She is a recipient of the Henry Kohn Award from the Tanglewood Music Center, an Honorary Fellowship from the Montgomery Symphony Orchestra, the Aaron Copland Recording Grant, and first prize of the Mikhashoff International Pianist-Composer Competition. Chang’s recordings can be found on Albany, Centaur, Parma, and Sony Korea. Her research has been focused on piano etudes, music by women composers, interdisciplinary outreach programs, and music by Korean composers. She expanded the topic of music by Korean composers into a new music theory class at FSU, a class for non-musicians at Osher Lifelong Learning Center at FSU, and various short lectures and lecture recitals. Ms. Chang graduated from Seoul National University, and earned her Master’s and Doctorate degrees from the Jacobs School of Music at Indiana University. Chang is a faculty member at the Brevard Music Center and a core member of the Intersection Contemporary Ensemble. She has been a lecturer at Florida State University since 2012, and served there as a Visiting Assistant Professor in 2014-15. 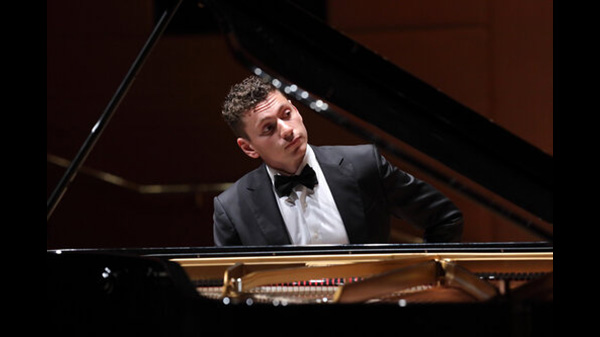 Dominic Cheli performed in our online pre-recorded 2020 season and we wanted to give our patrons the chance to see and hear Dominic play, in person!

Welcome back to The Artist Series, Dominic! Dominic Cheli’s playing has been described as “spontaneous yet perfect, the best of how a young person can play.” (Symphony Maga-zine).

His rapidly advancing career included his Walt Disney Concert Hall Debut with legendary conductor Valery Gergiev where Dominic was described as “mesmerizing, (he) transfixed the audience…his fingers were one with each key.” (LA Times). He gave his Carnegie Hall Recital Debut in 2019 and has had a busy performing and record-ing career ever since. He recently recorded his 2nd CD on the Naxos label of the music of Liszt/Schubert, and a 3rd CD of the music of Erwin Schulhoff on the Delos Label featuring his collaboration on Piano Concerto no.2 with Maestro James Conlon. He also recently completed work as a composer, audio editor and performer on the docu-mentary Defying Gravity (2021). A native of St. Louis, Dominic has performed with orchestras all across the coun-try and abroad including the San Diego Symphony, Sarasota Orchestra, Indianapolis Symphony, Columbus Sym-phony, Princeton Symphony, Colburn Orchestra, Virginia Symphony, Adrian Symphony, and the Nord-westdeutsche Philharmonie (Germany). He has worked with conductors such as Valery Gergiev, James Conlon, Kesho Watanabe, Gerard Schwarz, Yaniv Dinur, Markus Huber, Rossen Milanov, Arthur Fagen, Bruce Kiesling, Matthew Aucoin, and many others. Dominic recently debuted at several major festivals across the United States including the Ravinia Festival, Mostly Mozart Festival, and the Virginia Arts Festival. Upcoming engagements in-clude appearances with the Seattle Symphony, a re-invitation to the Ravinia Festival, his debut at Alice Tully Hall, and recitals in Philadelphia, Washington D.C, and New York City. In July 2017, Cheli’s 1st album, featuring the mu-sic of Muzio Clementi and released by Naxos, was hailed as “definitive performances, that match splendid playing with an appreciation of Clementi’s diverse, classically based style.” Also in 2017, Dominic was named 1st prize winner of the Concert Artists Guild Competition in New York City. 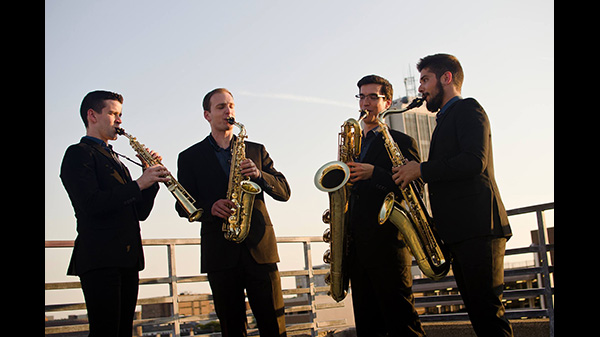 The Sinta Quartet is on a mission to bring the versatility, homogeneity, and excitement of the saxo-phone to audiences everywhere. Performing entirely from memory, the quartet provides a fresh take on chamber music that is at once beautiful, virtuosic, and a completely interactive experience.

Sinta Quartet is The Artist Series’ Artist-in-Residence ensemble for 2022-23. we are pleased that we can continue to offer this educational outreach to students in Leon, Gadsden, and Jefferson Counties. This program is made possible by funding from the National Endowment for the Arts and a Fast Track grant from the Division of Arts and Culture. 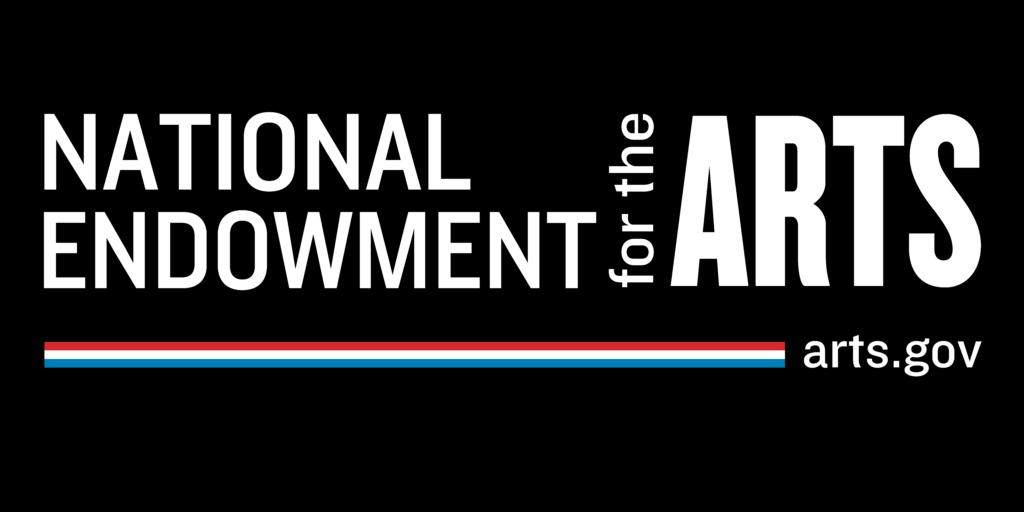 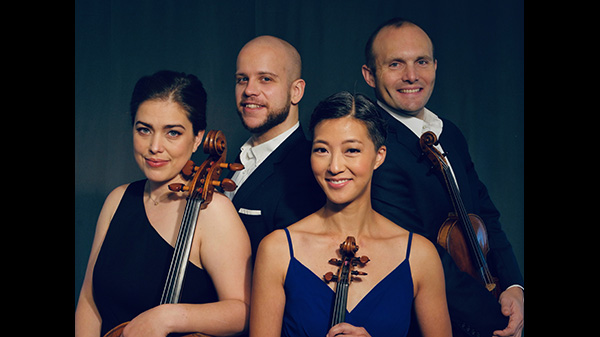 Celebrating its sixteenth anniversary in 2022, the Jasper String Quartet is recognized as one of the leading American string quartets on the performance stage today.

A recipient of Chamber Music America’s prestigious Cleveland Quartet Award, the quartet has been hailed as “sonically delightful and expressively compelling,” (The Strad) and described by Gramophone as “flawless in ensemble and intonation, expressively assured and beautifully balanced.” The New York Times named their album Unbound as one of the 25 Best Classical Recordings of 2017.

The Jasper String Quartet is the Professional Quartet-in-Residence at Temple University’s Center for Gifted Young Musicians. In addition, the Quartet is the Founder and Artistic Director of Jasper Chamber Concerts. The Jasper Quartet is committed to celebrating the diverse array of compositional voices writing for string quartet on every program. 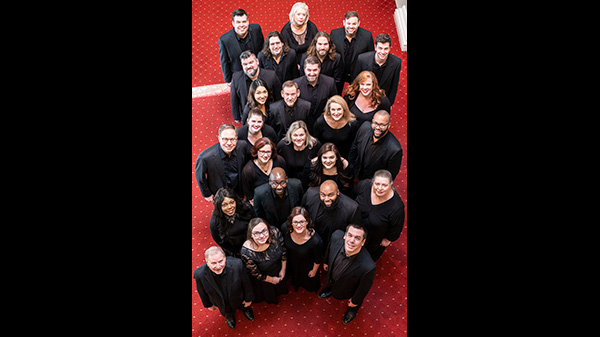 Coro Vocati is an ensemble of professional singers based in Atlanta, Georgia, with a mission to create music at the highest level of choral artistry.

Under the leadership of renowned choral conductor and educator Dr. John Dickson, and in collabora-tion with pianist and organist Dr. Jonathan Crutchfield, the choir has established itself as one of the premier professional choral ensembles in the southeast, featuring some of the region’s most talented vocalists with polished performances cele-brating unique and intriguing programming.

With a repertoire spanning the breadth of choral literature, from early music and time honored classics to new works, Coro Vocati’s performances represent a diversity of musical styles and cultural backgrounds. The choir is a champion of modern composers, having performed a number of local, regional, and world premieres, and is active in commissioning new works.

Coro Vocati is excited to return to the performance stage in 2022-2023 for its thirteenth concert season. 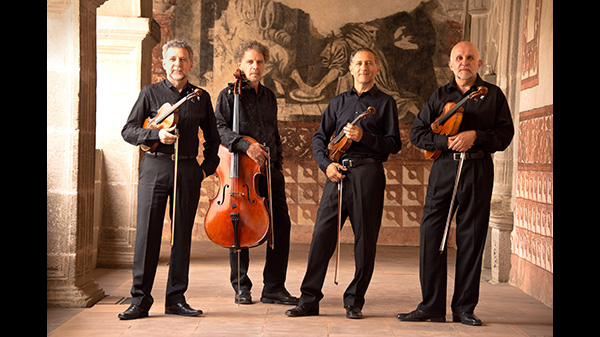 Individually, we are Saul, Aron and Alvaro Bitran, and Javier Montiel. Together, we are known as the Cuar-teto Latinoamericano. Our audiences have lots of questions about us. For example, whether that big case that we carry with us is a guitarrón.

No, it’s a cello. And we are not a mariachi band; we don’t play with ponchos or guitars, despite what many people ask. We know that our name may be a bit misleading, but there are reasons for it: not only do we hail from Latin America, but mainly, we have made an almost forty-year-long career by mostly playing con-cert music by composers from countries South of the Rio Bravo. This music “the music of our continent” is as varied as its culture, its geography, its food and history. Some of these composers undoubtedly draw from Latin America’s rich popular music tradition, while others write music that sounds universal, and could have been written anywhere in the world. Having said that, it does seem that a lot of the Latin American repertoire prominently features rhythm (or so we are told). But in any case, our only criterion for selecting our Latin American repertoire is its artistic quality.

Of course, like any budding string quartet, in the distant year of 1982 in Mexico City, we started with Mozart, Beethoven, Brahms, Borodin, Ravel, etc. But soon thereafter we began to discover the wonderful repertoire awaiting us in our own neck of the woods and, in parallel, we found out that it was very much appreciated in different parts of the world. This is how this music, which we have recorded on over 80 CDs, has gotten us many awards, such as two Latin Grammys, multiple Grammy nominations, and the coveted Diapason d’Or in France, among others and has brought us to renowned halls such as the Teatro alla Scala in Milan, Car-negie Hall, the Concertgebouw and other marvelous concert venues in Israel, China, Japan, New Zealand, and practically all of Europe and the Americas.

Thank you to our sponsors!

Many corporate sponsors in the capitol region support The Artist Series. We are grateful to all whose contributions make it possible to sustain artistic excellence and variety, affordable tickets, and our music outreach programs that inspire students and help to protect the future of classical music.